Sign Up To Get The Full Course Right Now!

Yes, I am ready to get started today!
* we will not spam, rent, or sell your information... * 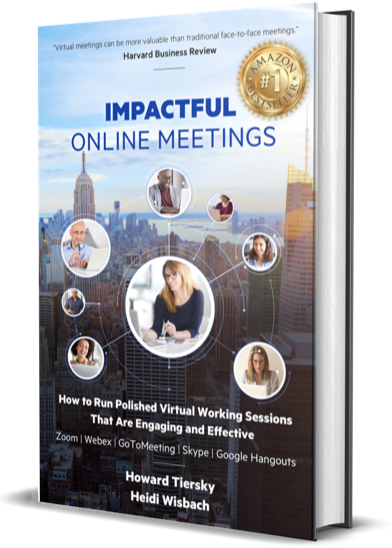 You can’t run a good virtual meeting without engaged participants—and with much of the U.S. workforce working from home, knowing how to grab and hold their attention is Job One. Howard Tiersky shares some simple “plot twists” to keep your audience on the edge of their seats.

New York, NY (March 2020)—It’s not easy to keep participants engaged in meetings, even when you’re sitting across the table from them. But when everyone is sitting in their individual houses—often with spouses, kids, and barking dogs in the next room—it’s even trickier to pull this off. With much of America working from home now, Howard Tiersky says it’s crucial that we make “meeting engagement” a priority.

“You want people on the edge of their seat, listening, questioning, offering up ideas,” says Howard Tiersky, coauthor along with Heidi Wisbach of Impactful Online Meetings: How to Run Polished Virtual Working Sessions That Are Engaging and Effective—Zoom | Webex | GoToMeeting |
Skype | Google Hangouts (Spiral Press, 2020, ISBN: 978-1-734-41534-6, $14.99). “You don’t want them emailing, checking Facebook, or just being a passive listener.
“The good news is, there are some simple things you can do that skyrocket engagement,” he adds. “Some of them are common sense. Others may be kind of surprising.”
In his book, Tiersky offers a wealth of tips for making online meetings as impactful as possible. He also refers readers to his website, impactfulonlinemeetings.com, so they can be notified of book updates and also access other helpful supplemental resources.
Read on for some practices that will keep people focused and tuned-in.
Ask people to share a funny or embarrassing story.
When facilitating introductions (which you should always do when people don’t know each other well), help participants get to know each other by sharing a brief fun fact or a funny story. According to Slack’s Ultimate Guide to Remote Meetings, “one study found that workers who shared a funny or embarrassing story about themselves with their team produced 26 percent more ideas in brainstorming sessions than workers who didn’t.”
Turn on video to squelch multitasking.
Encouraging or even requiring participants to turn on their video cameras immediately makes them more engaged because they can be seen and therefore their reactions are part of “the show” versus something private. Also, they’re less likely to multitask (which is an engagement killer) since they can be seen by others.
Give people roles so they’re not just “webinar watchers.”
Seek to involve as many people as possible with presentation roles in a meeting. “Sometimes we even do this ‘on the spot,’” says Tiersky. “For example, at a meeting to review selected customer feedback that had been received on a product, we put the feedback on a slide, picked three participants, and asked them to alternate between reading the 15 to 20 lines of feedback to the group. No rehearsal needed.”
Work together on a deliverable.
For example, you’re probably familiar with a SWOT analysis. Instead of presenting a completed SWOT to your meeting participants, put a link to a blank SWOT slide in Google Slides and ask them all to simultaneously work on filling it in. In under two minutes, you will have a completed SWOT that represents the collaborative efforts of the group. This can also be done with a wide range of other types of documents: idea lists, project plans, lists of competitors, etc.
Compel attendees to use the chat feature.
You can increase participation and get feedback by asking your audience to enter something into the chat. Ask a question like, “What do you think is the most important aspect of our customer service?” and ask everyone to quickly go to their chat and enter a one- or two-word answer. You then not only know they are “still there,” but you are engaging with them and getting some feedback. You are in dialog with your audience.
Do a spontaneous poll.
Most online meeting platforms have the ability for the host to put a multiple-choice poll out to all attendees and then show a graph of responses. If an important issue comes up spontaneously that you want to poll, send a private text to a person who is “on point” to support presentation needs and ask them to quickly create the poll (it takes 1-2 minutes) and ask them to text you back when it’s ready. Keep the discussion going while you wait and then when you get the message that the poll is ready, let the group know you’d like to poll them on the topic—that will be the cue for your support person to put the poll up on the screen.
“You will look like a magician since you ‘just happened’ to have a poll ready to go on the very topic that came up spontaneously on the call,” says Tiersky. “It’s good if your participants think you are all-knowing; they are less likely to try to multitask without being noticed.”
Hold breakout sessions.
In most meetings of more than eight people, usually most of the talking is done by just five to seven participants. This is one reason why during live workshops Tiersky often breaks larger groups into breakout teams, so they can come up with ideas, work on prioritization, action planning—whatever the work is—in smaller groups and then come back to the larger group and report on the work they did. (Several of the major online meeting platforms including Zoom and Google Hangouts now offer breakouts.)
“We give each team clear instructions for the work they are to do, in writing, and then usually give them 20 to 40 minutes to do it,” he says. “A compressed time frame forces the group to organize quickly; get to work; and focus on progress, not process or perfection. I’ve been amazed over the years that sometimes when clear instructions, a small team, and a tight time frame are combined like that, you get work done in a half hour that might have taken days, weeks, or months if done ‘the usual way.’”
Don’t be shocked if you find people love working together virtually, says Tiersky.

“It’s not unusual to find that you get more done than ever before,” he says. “Great things can happen when everyone is present and focused, even when it’s from the comfort of their own homes. When the pandemic is over, you may not want to go back to the old way of working.”
For more information, please visit impactfulonlinemeetings.com.
About the Book: Impactful Online Meetings: How to Run Polished Virtual Working Sessions That Are Engaging and Effective—Zoom|Webex|GoToMeeting|Skype|Google Hangouts (Paperback: Spiral Press, 2020, ISBN: 978-1-734-41534-6, $14.99; E-book: ISBN: 978-1-734-41533-9, $9.99) is available from Amazon.

Get Your FREE Training and FREE Preflight Checklist!